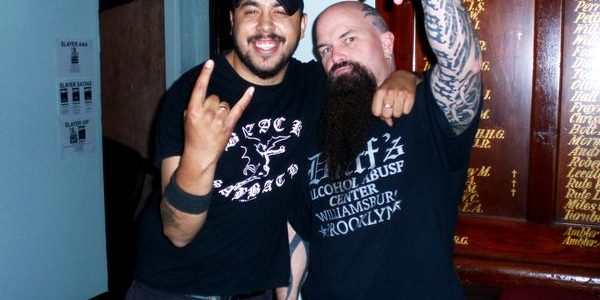 Yo mama’s whizzer, otherwise known as Adelaide.
Most of us live in the south. Our front man Chad used to, but he’s a northerner now along with Benny our bass player. Southern Metal with Northern Low Tones \m/

How long you been playing for?:

Our first show was with Double Dragon and Black Like Vengeance (Vic) for the BLV album launch at Enigma in November 2007, so we’ve been playing gigs together for almost 3 and a half years. Fuck! That long?!?! We just recently played our 50th show… we’re a sentimental bunch of bogans. Metal guitarists Mike and Shane have been writing and playing music together for a good 15 years. Got no idea how they still put up with each other! Drummer Sven and vocalist Chad have been writing music together for a fuck of a long time too. They simply don’t put up with each other!

Big Fucking Day Out 2010! What a fucking show that was! Biggest stage ever, which meant we could run all over the joint. Had a dude in a wheelchair in front of us being hoisted up on top of the mosh pit, PA Speakers up to the ceiling! It was brutastic! (http://www.facebook.com/SEBONKIRA?v=app_2392950137#!/video/video.php?v=191921047880) Followed closely by our Static X support. Best we’ve ever sounded at Fowlers! Awesome crowd.

Loz’s party at the Squatters was pretty awesome too! Jammed out, got drunk, nuff said.
Fringe and Clipsal Race Opening Night in 2008 when we played at the Cranker is something we’ll remember too. A crazy drunken mosh, rolling on top of vomit and broken glass, by a pub full of a combination of metal heads and dudes that rarely see music that heavy. Can’t forget that crazy shit!

Against The Grain and the Feej BDay Bash last year were all awesome too!
Being on the road with Dreadnaught (more Victorians) and playing in Sydney, Melbs, and Tassie was a massive blast too!

You really can’t go past the Big 6 ;P
Pantera, Sepultura, Machine Head, Lamb of God, early Metallica and Megadeth. Old school metal played fucking loud. But if you dig deeper, you’ll also find some Satriani and Vai, Al Di Meola, John Butler, and yes, even some AC/DC. And if there’s any Michael Jackson being played… watch that dance floor!

Recording a full length album to follow up from our debut EP – One Thousand Ways To Be.

What gear do you use:

Sven uses a Yamaha kit with Paiste and Sabian cymbals, Iron Cobra kickers and any bandana he can get his hands on.

Shane is fuelled by Stella Artois and uses an Engl pre amp with a Marshal 9200 power amp and TC Elec G Major 2 effects unit. Jackson, Schecter and Samick guitars.
Mike is dressed by the Salvation Army and uses an Engl Invader 150, BOSS GT8 pedal, BC Rich and LTD guitars.

Benny uses a Mark Bass 3 head with Ibanez basses and shines up his bald noggin with Mr Sheen.

Chad uses a mix of phlegm and sweat and tries to remember to bring his Shure SM58 occasionally.

Check out the film clip for our track “Lesser Than” courtesy of the good and talented peeps at Metal Unleashed: http://www.youtube.com/watch?v=6wSTYsxteXI

Why should people give a fuck?:

They should give a fuck because it’s from the heart. So much of life is contrived, consumeristic, meaningless drivel etc. We love what we do and what we write, and we hope others do to.

If not, then we’ll acknowledge that we have weird arse musical tastes and live with the fact that we are a minority of the minority, but otherwise, we love sharing our music with those that also enjoy it, because it’s our passion, and to share it is a fucking awesome experience and people seem to enjoy our shows.

At the end of the day, we love what we do, and if you do too, that’s cool. If not, that’s cool too. Weirdos!