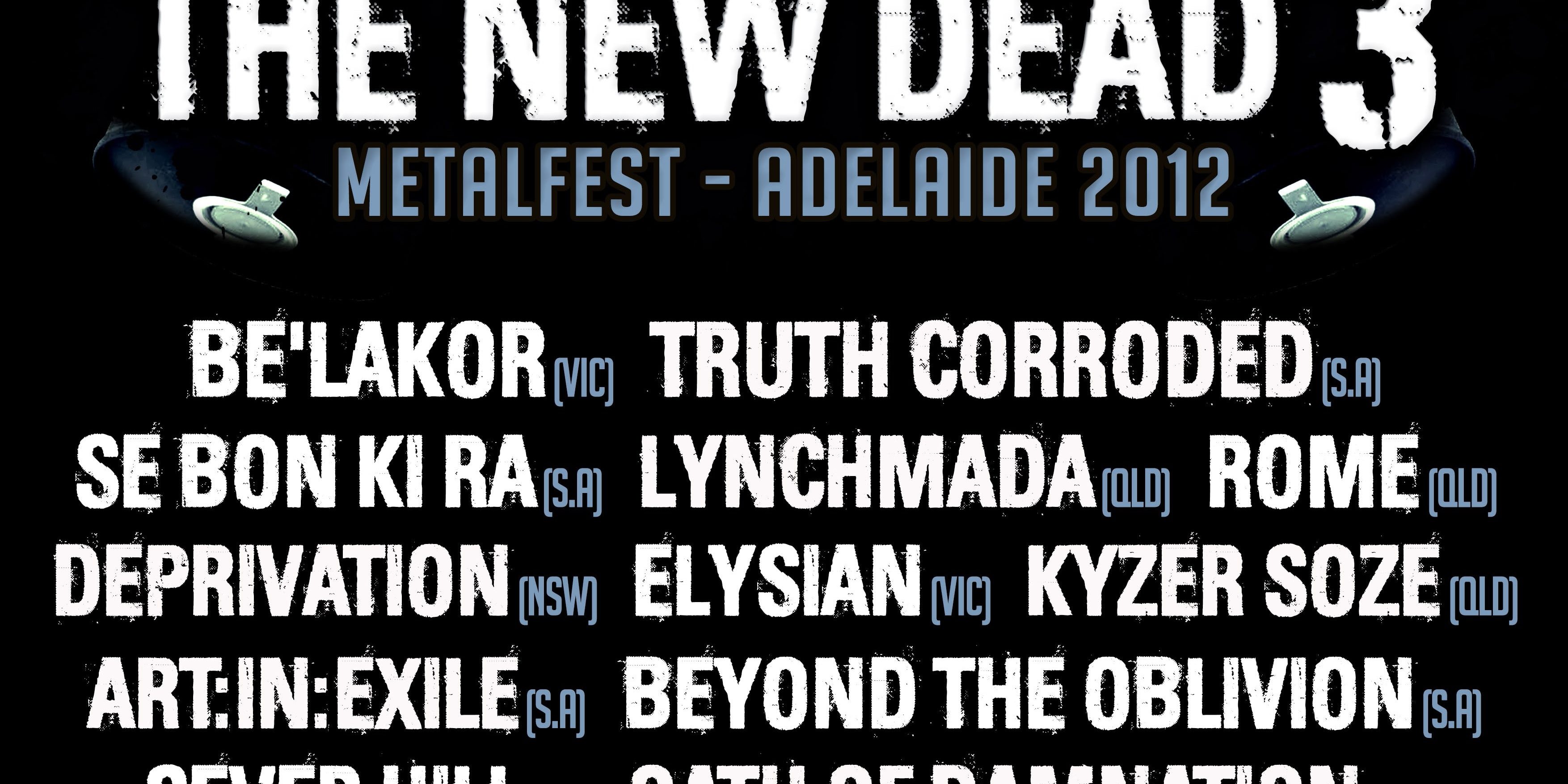 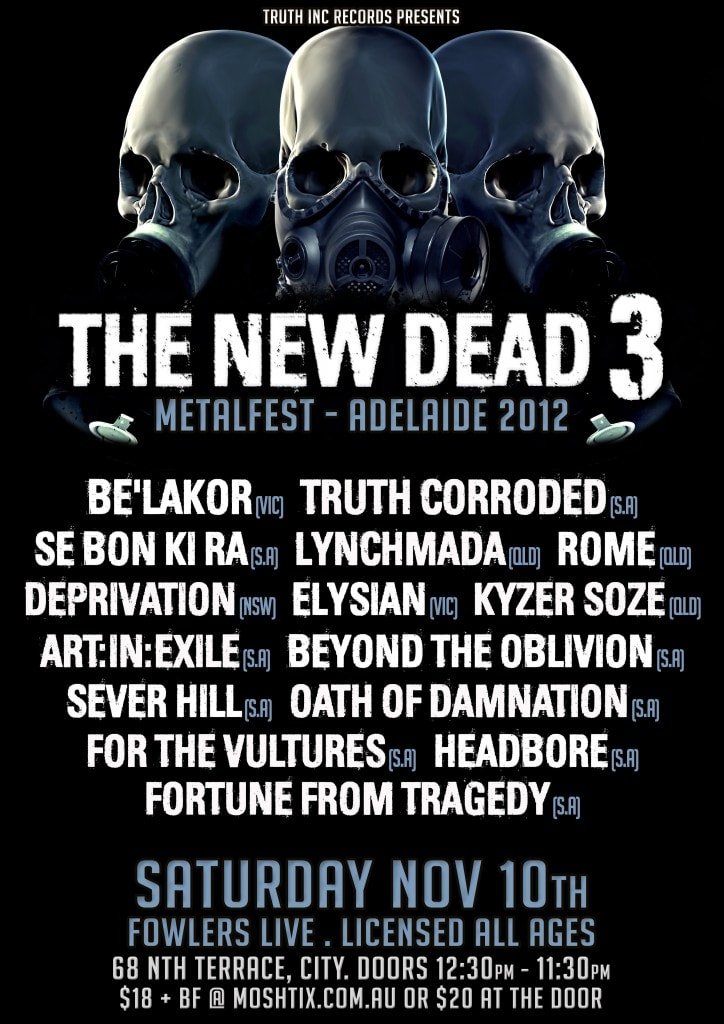 ROME (QLD):
From the ashes of 2 of the biggest Australian international metal bands, DEVOLVED and The BERZERKER, comes ROME!

http://www.facebook.com/ROMEMETAL
http://www.youtube.com/watch?v=T6_uHSLuqL8&feature=player_embedded
DEPRIVATION (NSW):
After completing their first full length album (Amalgam) early in 2011, Deprivation have been on a mission to destroy stages and fans alike. Starting with multiple Australian tours in support of Amalgam, they have shared the stage with: Frankenbok, Truth Corroded, Lynchmada, and many other bands. Deprivation then crossed the Pacific to do a US tour with: Short Fuse, Prey for Sleep, and Casket of Cassandra on the Zombie Apocalypse Tour, playing many historic metal and rock venues. Destroying clubs and gaining numerous fans in America, Deprivation have returned home to play some Australian shows to finish up the year (The War Faction Bunker Party 9, The Whiplash Festival IV Tour, and a show with Hypocrisy and of course are honoured to be playing this year’s New Dead Metal Festival in Adelaide). In early 2013, Deprivation will be hitting the recording studio to lay down their sophomore album, and are preparing Australian and US tours in support of it.
http://www.myspace.com/deprivationband
http://www.facebook.com/deprivationband
http://www.reverbnation.com/deprivationband
http://www.youtube.com/watch?v=0vJ1CcwDPvY
http://www.twitter.com/deprivationband

ELYSIAN (VIC):
Elysians music is powerful, driving and extremely confident. They blend their passion for straight up metal and progressive rock in a way unheard of in the current national and international heavy music scene. Elysian’s latest album ‘Wires of Creation’, storms its way through eleven tracks of hook laden, flowing dark melodies, technical solo interludes and snarlingly evil vocal work. Some bands aim to have their songs sound disjointed by dramatically switching between genres; that’s not what Elysian have done, the whole album flows, it attacks and it releases, its aggressive but gives you time to breath and take it in.”

http:// http://www.facebook.com/ElysianMetal
http://www.myspace.com/elysiansmetal
http://www.reverbnation.com/elysianaus
http://www.youtube.com/watch?v=zwP767rKhHU
KYZER SOZE (QLD):
Kyzer Soze is a 5 piece Death Metal band from Brisbane trying to bring their relentless brand of death metal to the world. Kyzer Soze have made a name for themselves for having a relentless live show filled with energy and entertainment. Kyzer Soze has to be seen to experience the power of their music and performance.
www.facebook.com/kyzersozemetal
www.reverbnation.com/kyzersoze
ART:IN:EXILE (SA):
Art:In:Exile’s latest album, entitled ‘Æon Somnia’ (mixed and mastered by the legendary Jens Bogren from Fascination Street in Sweden – Opeth, Katatonia, Swallow The Sun etc), runs the full spectrum of music, from industrial, to melodic death, to extreme to classic metal to produce a wall of crushing metal, swirling melodies, and soaring vocals. Truly the pinnacle of the bands career to date!

SEVER HILL (SA):
If you’re Severed once, you’re Severed Forever, and SEVER HILL’s fans prove it. SEVER HILL provide the ultimate fusion between Death and Thrash metal, with some locally-influenced Metalcore-style sounds thrown in. Hailing from Adelaide in South Australia, SEVER HILL have shared the stage with such acts as TRUTH CORRODED, HYPNO5E(FRA), Deus Ex Machina (SINGAPORE), ISAW, OCTANIC, ARCADIA and more, and never fail to smash out a spectacle of unrivaled power and brutality. With a 4-Track Demo, two singles released and our Debut EP RESURGENCE coming out in October the future is promising for SEVER HILL, with a full-length Debut album currently in the writing process.
http://www.facebook.com/severhill
http://www.youtube.com/user/SeverHillTheBand
http://www.triplejunearthed.com.au/SEVERHILL2
BEYOND THE OBLIVION (SA):
Beyond The Oblivion formed late in 2010. We are a progressive metal band from Adelaide, South Australia. We are currently recording our debut EP due to be released late 2012.
http://www.reverbnation.com/beyondtheoblivion
http://www.myspace.com/560445340
http://facebook.com/beyondtheoblivion
http://www.youtube.com/user/beyondtheoblivion
OATH OF DAMNATION (SA):
Unearthed and held before a Cadaver Synod, and beheaded posthumously,the spirit of the vengeful Pope Formosus resides within this death/black metal quartet. An oath of damnation is cast upon all, unleashing blasphemous sermon over an onslaught of dark, symphonic death metal destruction. Darkness is that which claws from the grave, and darkness in Metal it shall bring…
http://www.facebook.com/OathOfDamnation
FOR THE VULTURES (SA):
What do a T-Rex, a Volcanic eruption, and Adelaide’s latest Deathcore band ‘For the Vultures’ have in common?……. Straight out brutality! Combining sporadic gutteral vocals, sensory overloading guitar riffs, pummeling bass groove, bone crushing breakdowns and destructive percussion, their unique sound would serve as the perfect soundtrack to a carpet bombing raid on furry animals…. With a demo and merch already available and an EP in the sights by the end of the year, keep an eye and an ear out for these guys!

FORTUNE FROM TRAGEDY (SA):
Fortune from Tragedy finalised it’s lineup in 2011 following some member changes. Pushing the boundaries of metal, they strive for the hardest riffs between face smashing breakdowns. Soaring guitar melodies meld with hardcore screams to provide their core sound, while the drums and bass drive a truly brutal force to be reckoned with. Fortune From Tragedy’s massive sound is progressive, energetic and aims to be heavier, harder and faster with more riffs and melodies than anyone on the scene.

http://www.facebook.com/fortunefromtragedy
HEADBORE:
HEADBORE formed late 2011 and have already made an impact on the Adelaide Metal Scene. With an emphasis built around song structure, the music while brutal in element still has traces of melody. With fast guitars, furious beats, thunderous bass, aggressive vocals and energetic live show all aspects of your metal needs are covered. The band is currently recording with a release date due in early 2013. Check out their facebook & soundcloud pages for access to 2 songs to get the blood pumping.
This is HEADBORE
www.facebook.com/headbore
www.soundcloud.com/headbore
Categories: Events, UncategorizedOctober 29, 2012
Share this post
TweetShare on Twitter Share on FacebookShare on Facebook Pin itShare on Pinterest Share on LinkedInShare on LinkedIn