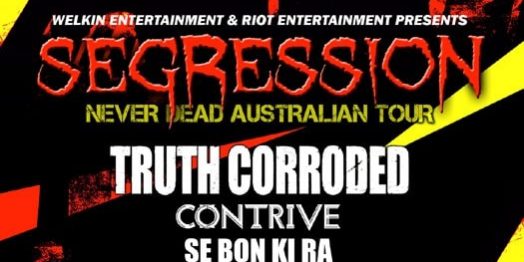 Captains log star date May 14th 2011. The 5th of the 5th 2000 was a long time ago, but we’re all still here. And it’s a good thing too, otherwise we would have missed seeing Segression tear up the Fowlers stage for a solid hour-and-something set on Saturday night pumping our some of their crowd pleasing classics such as the afore-mentioned dooms day harbinger and the newly released single Hero Anthem from their latest album.

SE BON KI RA had the unmixed pleasure of opening this show. We were a little worried that the early start time of around 7pm on a cold cusp of winter night would mean that we would be thrashing it out to an almost empty room. Courtesy of the metal love we have come to be able to expect from our beloved Adelaide hometown metal heads, most of the crowd that would assemble for the evening was there by the time we kicked off.

Having not opened a show for a while we decided that it would be an all guns blazing assault from the get go. With a small investment in hiring a wireless microphone for Chad so he could maraud about like a man possessed, untethered by the restriction of a sonic umbilical, we reported for duty back stage. Roger (the friendly Fowlers sound guy) hit play on our newly edited intro track which was by now belting through the PA signalling the commencement of the battle (add extra cheese to personal taste). The response was great with everyone making their way in from the bar area to catch the first few notes of our set. We were standing back stage getting ready to go on as the track played out and Jason from Truth Corroded who was back there with us made the sage observation that it was like watching Metallica go on. If there is one thing I can say about the Truth Corroded front man it is that he is incredibly insightful and accurate in his social commentary… That and he’s one of the few proudly old school vocalists still relevant and still hitting it just as hard today as 15-20 years ago when all of us members of the pre-historic Adelaide metal foundation left the garage! 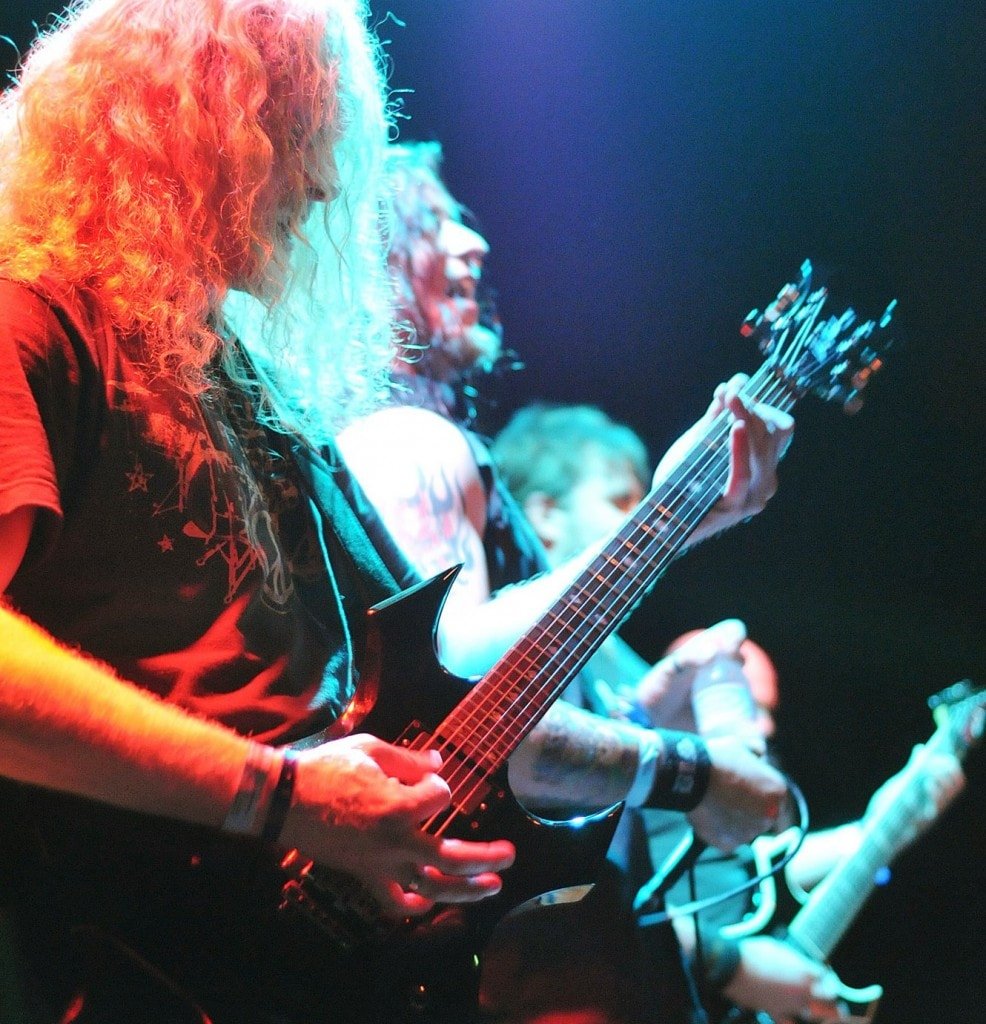 So on we went in a self induced mist of Metallica dream haze, Chad said a few quick words to fire things up a bit and the thrashing began. Actually it was a bit more of a thumping than a thrashing for our first track Caught in the Crossfire. This one will definitely be making an appearance on our upcoming full length album along with another few newies and some of our older favourites that didn’t make it onto the EP. The rest of the set was filled out by our Drop C tuned songs that were House of Cards, One Thousand Ways To Be and Shades of Hate. Then followed by a guitar swap for a couple of standard tuning tracks off the EP in Lesser Than and Chasing the Vulnerable.

Worthy of note was Shane’s brand new uber-pointy and ultra metal guitar – a very sexy DBZ Bird of Prey – that he had purchased only hours before the show. There will definitely be less invasions of his personal space on stage now that he can defend himself with such a dangerous weapon… but what can I say, we’re risk takers!

Chad made the most of being cord free for the night and went ape shit jumping off the high Fowlers stage and hitting the floor below like a cortisone injected teenager who has a fresh batch of cartilage in his knees just begging to be abused. He seemed to enjoy himself anyway having a mosh with mates between spitting out a line or two here and there.

So we were pretty happy with a decent performance (sometimes they’re good, sometimes they’re great, sometimes they’re shite, but they’re always fun!). We went out into the trenches that night to do our job of opening the show, setting the rules of engagement and getting the party started. We left the battlefield weary and sore yet with a sense of accomplishment that we shall take to our graves. (Too much cheese? Fuck you guys are fussy eaters!)

Contrive from Melbourne are touring with Segression on the Never Dead tour. Featuring on drums Andrew Haug from Australia’s premier triple j radio metal show The Racket, these boys offered a tasty morsel of melody infused thrash for our consumption. They sure make a lot of noise for a three-piece band with Andrew’s brother Paul looking after guitar and vocal duties simultaneously like. Always a refreshing flavour in a metal line up, the mood was thick in the venue while these guys did their thing.

Truth Corroded, Adelaide’s beloved “Truthies”. What can I say…. They’re back! After any band goes through the magnitude of line up change that these guys have been through recently (three fifths of the band) there is going to be a bit of down time while things get re-affirmed and tighten up. It seems that their recent Asian tour has created this solidarity amongst the new team because their set left blisters in my ears! In other news, original TC member Mark was seen lurking on the sidelines grinning with approval (or something), fuelling debate about whether he will soon be rejoining the thrash kings…

Segression came out meaning business and kept it up right throughout their generous set. Vocalist Chris regular interacted with the audience making for a more personal performance. Playing both newer tunes and classics the lads ran amok on stage adding an extra entertaining edge by using the whole stage space, spitting water at each other, whilst jumping, thrashing and smashing their way through a very tight display of old school metal. There’s a reason why these guys have been going for so long.

We’d just like to say a big cheers to Segression for including us in their aptly named Never Dead come back tour, promoters Welkin Entertainment, local promoters Truth Inc, and the other bands Truth Corroded and Contrive for a good night of metal, with many more to come. Here’s to Aussie metal bands putting in the dollars and the blood and sweat (no tears – metal bands don’t cry) to tour this barren land of cities too far apart so that we all get a variety of foods on our dinner plate.

Cheers also goes to the guests who bought items of our merch on the night. We hope you enjoy the EP, hoodies and tshirts. Every cent that we get back from selling those at the moment goes towards us being able to afford to record and release our next album. That is something we really want to do so thanks for helping us get there.

If you weren’t at the show or didn’t end up grabbing anything or even if you did, check our shop over here to help us build the kitty for our new album. This whole metal making thing is expensive!