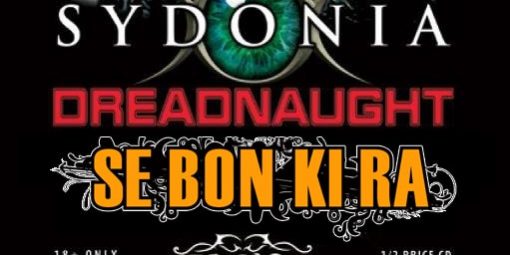 This impressive show is the follow up to this successful Sydonia show in Melbourne last year which Dreadnaught unfortunately couldn’t play but that has been rectified this year with both metal headlining a monster band line- up!

This year will be bigger and better and best of all it is in Adelaide and is guaranteed to rock ya socks off so get on this early as tickets will sell fast. All patrons who pre-order will be eligible for a half price CD from the band of their choice, who can say no to that!!!!

Sydonia (VIC)
It is a challenge to define Sydonia, it is far easier to let those who have listened to their debut album GIVEN TO DESTROYERS and or have seen them perform, paint the picture:

“Sydonia is a band that exemplifies the word ‘diverse’. The best of pop sensibilities is tempered at times with brutal angst. ‘No Woman’s Land’ is a song that should be playing on every radio station in every city on this planet!”
— D. Randall Blythe – Lamb of God

“Sydonia, they’re a really amazing band, and the lead singers got a very unique voice Theyre really heavy but incorporate so many different vibes that its a little bit hard to categorize them musically. I think, too, thats something music’s sort of lost”.
Jim Root – SlipknotStone Sour

Dreadnaught (VIC)
As one of Australia’s longest running and diverse groups Dreadnaught has established themselves as a cornerstone of Australian heavy rock. The might of Dreadnaught has seen sub-genres, bands & an entire generation come & go & still they are foremost in Australian rock giving us diverse offerings that are strongly rooted in the brand of Aussie rock & metal that they have become such a huge a part of. Currently writing new material for an LP to be recorded later this year, the current live set contains songs that span Dreadnaughts entire history. A history that has seen the band release 4 LPs & 2 EPs, tour Australia countless times, Japan in 2009, and support Testament, SYL, Cathedral, & Paradise Lost.

SE BON KI RA take no prisoners. In their brief yet brutal history the band has carved a solid groove through the Australian metal scene smashing some killer shows alongside some of the best our land has to offer including Dreadnaught, Alchemist, Segression, Psycroptic, Double Dragon, Alarum, Lord and Truth Corroded.

The band’s debut EP One Thousand Ways To Be has been described as a “five shot knockout of groove laden metal that will pound your ears into submission.” Stepping things up towards recording an album these lads will be hitting the stage hard unleashing some new material in trademark no bullshit fashion. Killer riffs, heavy beats and hard hitting lyrics delivered with an undeniable passion.

If you like your metal in the vein of Lamb of God, Pantera, Machine Head and Megadeth, buy a ticket, grab a drink, get down the front, and don’t hold back! 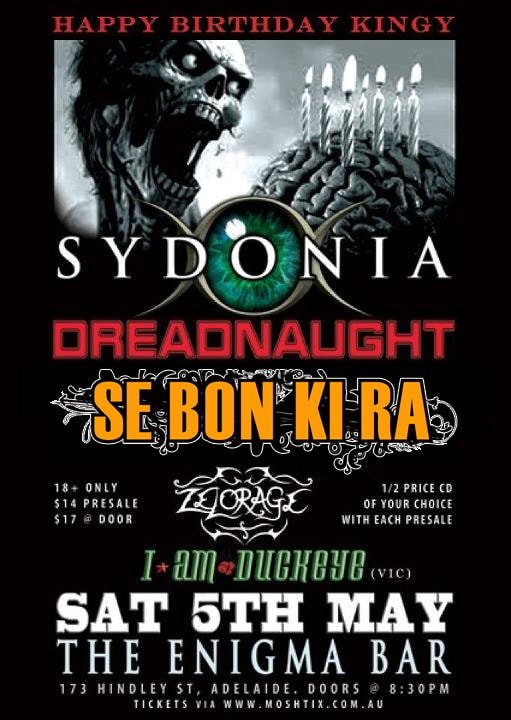