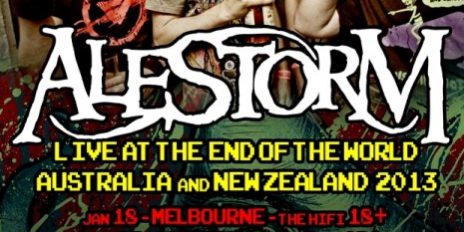 Holy whale barnacles! ALESTORM are hauling themselves back to AUSTRALIA!!! Having plundered the world mercilessly on the back of their ‘Back Through Time’ album, ALESTORM are sailing their way through the seas of time, to their favorite place on the planet with one last mission in mind…….the filming of their very first live DVD!!! 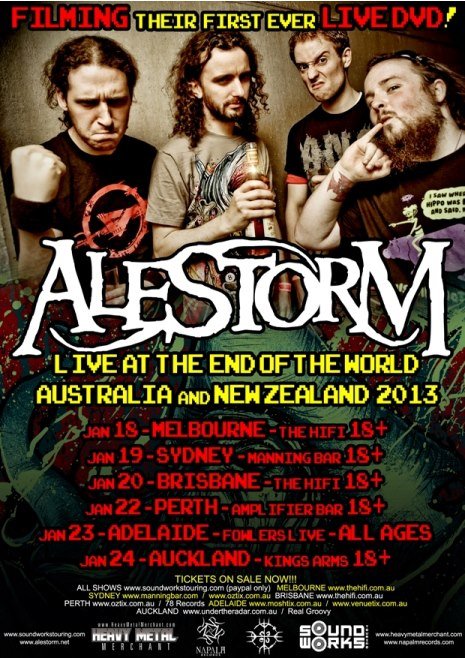 To be titled “LIVE AT THE END OF THE WORLD”, director TOMMY JONES ( Lamb of god , Kataklysm , Soilwork, Death angel) will be filming the entire ALESTORM Australian/ NZ tour to catch all the craziness, all the debauchery, all the tomfoolery, all the heroic drinking shenanigans and every single Australian metal fan is invited to be part of this world exclusive. Cracking the voyage off in jolly ol’ Melbourne, where the entire set is to be filmed for the release, each show and each day will be littered with cameras, capturing all the classic moments of a tour.
Frontman & pirate badass Christopher Bowes had this to say about the upcoming tour: “Ahoy there dudes & dudettes! After two unforgettably amazing tours of Australia, it was a no-brainer decision to come back Down Under again for the filming of our FIRST EVER live DVD. Dress to impress, get drunk, and prepare for the stupidest and most insane partying that no metal band before has dared put on DVD. Something involving alcohol and your girlfriends! Pirate catchphrase!”
So grab your matey’s, haul yourselves down to these exclusive shindigs and get your mugs on ALESTORM’S “LIVE AT THE END OF THE WORLD” DVD.
ALESTORM with guests performing at:
Jan 18th – The Hifi Bar, Melbourne (Live DVD shoot) – 18+
Jan 19th – The Manning Bar, Sydney – 18+
Jan 20th – The Hifi Bar, Brisbane – 18+
Jan 22nd – Amplifier Bar, Perth – 18+
, Adelaide – ALL AGES!!!   ****’SE BON KI RA’ MAIN SUPPORT ****
Jan 24th – The Kings Arms, Auckland – 18+

ALESTORM WORLD EXCLUSIVE!!!
From today, buy a ticket to any of the Australian Jan 2013 tour shows using paypal through this link:
www.soundworkstouring.com/australia/tour/73.php
And not only will you be saving money, but you will get yourself an exclusive ALESTORM fridge magnet, for your fridge, that very important fridge that keeps your very important ales cold. This is not available anywhere else in the world!!!