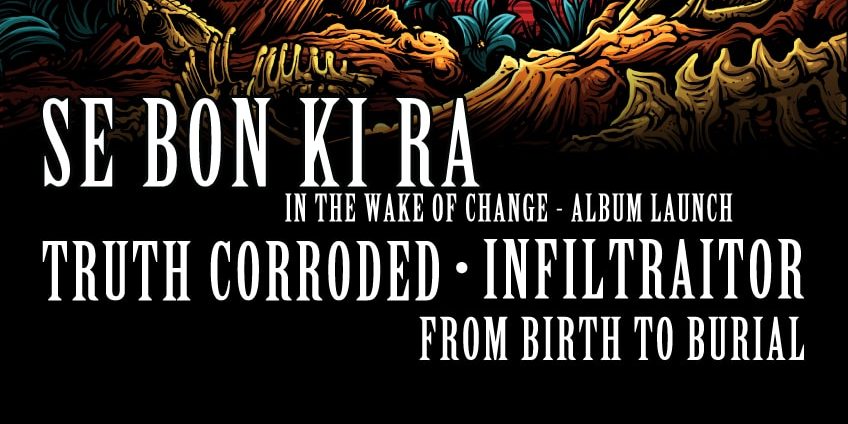 IN THE WAKE OF CHANGE, album launch. We’ve got a story to tell with this album. A story about living. Tough times, happy times, real raw emotion, truth, lies, deception and conviction. What did you expect from life? Are you getting it? Or is the world leaving you behind, IN THE WAKE OF CHANGE? Get up. Fight back. Live with honour. Be the one who made it happen. If you make a mistake, make it right. If someone is hurting, help them. If you want something enough to dream it, create it. The only constant is change. If you can’t control it, accept it.

Proudly recorded here in Adelaide at Capital Sound & Against The Grain, mixed and mastered in the UK by Scott Atkins (Sylosis, Cradle of Filth, Gama Bomb).

In 2011 TRUTH CORRODED released the bands latest album WORSHIP THE BLED which features Kevin Talley (SIX FEET UNDER, MISERY INDEX, DAATH, CHIMAIRA) on drums and was produced by Jonas Kjellgren of SCAR SYMMETRY. The album was released through its own label TRUTH INC RECORDS in Australia – a label that also represents MORS PRINCIPIUM EST (Europe/AFM Records), LYNCHMADA (Australia) and HYPNO5E (Europe/Season Of Mist) – and through ULTIMHATE RECORDS in Europe and Japan.

TRUTH CORRODED followed up the album release with tours across Australia, Japan and South East Asia supporting bands such as FEAR FACTORY, FORBIDDEN and WARBRINGER and across Europe in support of MALEVOLENT CREATION, KRISIUN, VITAL REMAINS, ORIGIN and PSYCROPTIC. “WORSHIP THE BLED has seen TRUTH CORRODED reach its largest audience yet with the most extensive touring we have had the opportunity to undertake and a steadily established global network representing the band ” comments bassist Greg Shaw on the bands development since the release of its latest album. TRUTH CORRODED are now writing and preparing the bands next album which will be due for release in mid 2013.

Since 2005 TRUTH CORRODED have gone from a hard working local / national heavy music act to touring across Europe, China, Japan, South East Asia and Australia numerous times and performing alongside bands such as LAMB OF GOD, FEAR FACTORY, BEHEMOTH, ARCH ENEMY, CHIMAIRA, IN FLAMES, DEATH ANGEL, SUFFOCATION, SEPULTURA, GOD FORBID, THE AMENTA and THY ART IS MURDER. The bands perseverance and hard DIY work ethic has been a driving force in its success, and TRUTH CORRODED never lose sight that future success and opportunity will be equally hard won. TRUTH CORRODED are determined to see you on the frontline in 2013.

Since forming in 2007, INFILTRAITOR have worked tirelessly and gained a reputation for being an extremely polished live band with a strong DIY ethic. Drawing influences from various sub-genres of metal, the band’s sound is driven by precise dual guitar work, melodic and ambient keyboard lines, pounding technical drums and vocals that range from harsh death metal growls to clean, harmonized singing. The past four years has seen the band release two EP’s (2009’s “Shadows” and “VOID” to be released in june 2011) both mixed by Jonas Kjellgren (SCAR SYMMETRY and ex CARNAL FORGE) at Black Lounge studios in Sweden, and share the stage with a diverse range of bands such bands as Misery Signals, Veil Of Maya, My Children My Bride, The Amity Affliction, For Today, Blood Duster and Carpathian among others. 2012 has seen the band begin writing for their debut full length album and are planning for an early to mid 2013 release.

INFILTRAITOR will be supporting SOILWORK in Adelaide on the bands upcoming Australian tour. ” The band is thrilled ! ” claims guitarist Zoran Proban ” SOILWORK are a huge influence on us, and this opportunity is something we could never have imagined “

The latest achievement builds on what is shaping to be a huge year for the band, with an upcoming support alongside U.S tech / death outfit BORN OF OSIRIS, an appearance at Adelaide’s largest metal fest ‘THE NEW DEAD #4’ and an upcoming new album.

From Birth To Burial

After forming over a couple of years ago and after a couple of member changes one thing has AND always will remain constant – the desire to push forward through the integrity of metal! Catch these guys opening for the night. They will get the place warmed up!