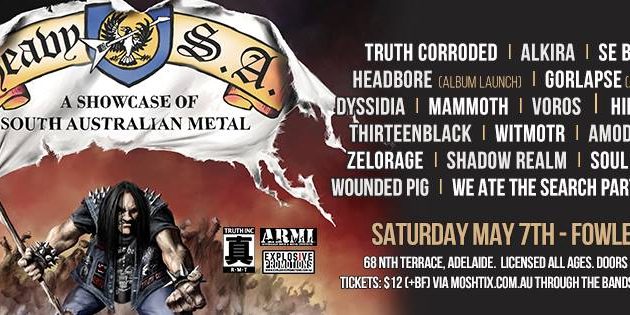 “So that’s the preamble, let’s get to the gig, because it was a cage fight from the off. Passion, power and a crowd familiar with the product. By the time we got to, ‘Nailed Into Place’, the place was going mental. This was one of the picks from the review and the crowd was up and the band was grinning and feeding off each other. We got to the end of the song and the photographer next to me says, ‘when do they let up’. That’s a dumb question as we crashed into ‘Symmetry’ then ‘This Life I Create’.

This track is ‘Le Enfant Sauvage’ Gojira smashed with In Flames. ‘Sick of blaming my lack of power on external forces that render me nothing‘, we screamed into the song and it’s a multi-faceted lament with every shade and colour. As reviewers, we see and hear bands from all parts of the globe, but we almost lost sight of a local band producing such depth and power. This is a song I listen to regularly, but it takes on a life of its own live. It’s insanely good.

And in a blur, it was the last song, ‘Shades Of Hate’. Neat way to end the set with a track from the EP, ‘One Thousand Ways To Be’. Between the EP and the album, the band filled out the vision with confidence and technical ability, but this is a song to end a set, and keep the energy high. The place went up, the band rocked out the next band on should have called in sick, because the stage is unusable. Bass and one guitar in a huddle in front of the kit. Chad out front on his own leaning over the monitor screaming the words while the second guitar is in the front row, on the other side of the barrier, thrashing it out.

I cannot believe that this band remains unsigned. It’s a fucking travesty, but as a reviewer, I, of course, remain impartial, but let’s remember 17 bands in a day with some supporting international acts gives an element of comparison. Listening to about 400 acts in a year gives another opportunity to compare. Dyssidia came close but SE BON KI RA owned the day. It’s not their style to claim it, but it was a slick, professional take-down.”

You can read the full article here at Devils Gate Media.
http://devilsgatemedia.com/se-bon-ki-ra-fowlers-adelaide/