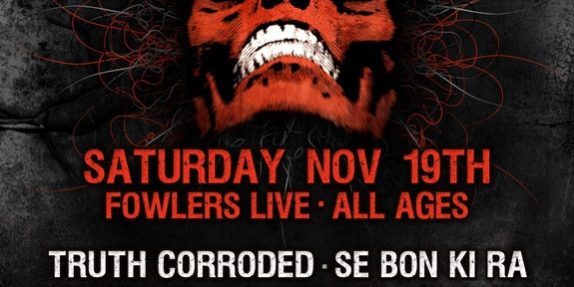 Great News for ADELAIDE METAL BANDS, the good boys at ‘Truth Inc Records’ are offering a free ticket to one member of any currently active (playing regular shows etc) Metal band based in Adelaide to ‘THE NEW DEAD’ Metalfest at Fowlers on  November 19th.  So for all the Adelaide metal bands that we haven’t heard yet, missed out on, that don’t get a chance to play shows like this or complain they aren’t on line ups etc. here is your chance to turn up and give out some CD’s / promo meet some bands and make some killer contacts for the future.

How do you get your free ticket?  simple send an email to truthinc@truthcorroded.com or private message me (http://www.facebook.com/jasontruthinc) on Facebook with the name of your band and the band member, your name and corresponding band will be on the door on the day.

Please note you must be at the show no later than 7pm. After 7pm all free passes will be void. But you should be their early to see all the bands anyway.

But just because we are giving out a free pass to one person doesn’t mean the rest of the band shouldn’t come. Everyone needs to do their part and make the Adelaide metal scene what it used to be and help make this show huge and a killer day for Adelaide / Aussie metal.

This offer is strictly limited to 30 bands so get in there fast.

CLICK HERE TO BUY YOUR TICKETS TO THE BIGGEST DAY OF METAL IN ADELAIDE THIS YEAR.

Tickets available at www.moshtix.com.au for $15 or $18 at the door on the day.

Get to know the bands on ‘THE NEW DEAD METALFEST’

TRUTH CORRODED – http://www.reverbnation.com/truthcorroded
“…. Dark thrash combined with the urgent feel of death metal, tried by many but accomplished competently by few, Truth Corroded nail it with such passion and desperation, it is truly inspiring…Without a doubt the best metal recording I’ve heard, from ANYWHERE, in quite a while. Buy it! ” Music S.A, Australia

INFILTRAITOR – http://www.reverbnation.com/infiltraitor
6 piece melodic death metal band from Adelaide, South Australia formed in 2008. INFILTRAITOR have gained a reputation for being a an extremely tight and polished live band. Drawing influences from various sub-genres of metal, the band’s sound is driven by precise dual guitar work and melodic keyboard lines over pounding technical drums, a rumbling low end and vocals that range from harsh death metal growls to clean harmonized singing.

HUMONIC – http://www.reverbnation.com/humonic
Born and raised under a sun that burns hotter than hell, Australia’s Humonic proves that blistering conditions breed extreme metal. Since Humonic solidified its line up in early 2009, their underground four-track demo and brutal music video have grabbed the attention of Aussie metal heads. Humonic is a band that was built for live audiences and their stage show delivers an interactive experience.

EYE OF THE ENEMY – http://www.reverbnation.com/eyeoftheenemy
Eye of the Enemy has grown from strength to strength from supporting some of the world’s biggest bands. A few standouts where the main Melbourne support for Cradle of Filth, the main Australian tour support to Amon Amarth, and playing on the annual Screamfest Downunder festival with such metal heavyweights such as Cynic, Dark Funeral, Destroyer 666, Malevolent Creation, Edguy, Ensiferum, Rotting Christ, Sonata Arctica and Spawn of Possession.

SYNTHETIC BREED – http://www.reverbnation.com/syntheticbreed
PERPETUAL MOTION MACHINE, the pioneering Australian cyber-metal outfit’s second full length studio release, is a masterpiece in its entirety. Where its predecessor CATATONIC alluded to new sounds, grooves and rhythms, this new beast wholly overshadows the previous work. Each song is a revelation in itself, every song a mind numbing experience on the senses leaving no doubt that this band has finally achieved a musical zenith hitherto unattained. Psychotic blasts of biomechanical fury, pulsating polyrhythms and annihilating metronomic precision are the signature sounds of Australian based Metal band, Synthetic Breed.

DOWN ROYALE – http://www.reverbnation.com/downroyale
Down Royale are a 5 piece metal band from Brisbane, Australia. The band has moved forward amazingly quickly throughout the year and played numerous shows with some well respected Australian metal bands. At the end of 2009 the band decided to put live performances on hold and focus on writing new material for their debut Ep “PROVING GROUND” scheduled to be released in early 2011.

THIS SIDE OF THE MASSACRE – http://www.facebook.com/tsotm
Back now in 2011, for probably no more than half a dozen shows, TSOTM is looking to do what they do best one last time: play their obscure, poorly received music in front of few people to little or no response. And they wouldn’t have it any other way.

CHAOS BURNING – http://www.reverbnation.com/chaosburningmetal
5 Piece metal outfit from Central Adelaide, Early 2010 seen the birth of its Historic line up, They are a force to be Reckoned with. With The mix of Insane Gutteral Vocals & clean Vocals, hard heavy & solid Guitar Riffs, Killer Drums & awesome Bass Riffs Chaos Burning is a band to look out for & not to be missed.

EXERTHUR – http://www.reverbnation.com/Exerthur
A new breed of heavy metal has been formed, mid 2010 guitarist Mark Burgess and Karl Drabsch after years of playing guitar together found other talented musicians Brendan Buss and Santhosh Jayasundera. This prove to be an instant chemical reaction which together formed the heaviest form of metal that there is to date, fast riffs, with absolute insane headbanging riffs Exerthur will not disapoint!

SEVER HILL – http://www.reverbnation.com/severhill
Sever Hill came about in mid 2009, when two bored guitarists (Patrick Malone, Brad Cannons) and Vocalist (Damian Sellar) wanted to form a band. soon after they recruited the Bass player (Jack Larkin) and Drums (Mitchel George). they had a slow start through out the rest of 2009 until they all became tighter as a band, and started churning out songs one by one. by October, 2010, Sever Hill had 7 originals, 4 of which were used and in the studio to record their debut self titled EP. two months later they played their first gig together. and they annihilated.

SIRIUS – http://www.facebook.com/siriusmetal
We are a 5 piece Adelaide Progressive, Melodic Metal Band that are based in the northern suburbs and we all inspire one another to constantly evolve as musicians to produce what ‘Sirius’ musically stands for. 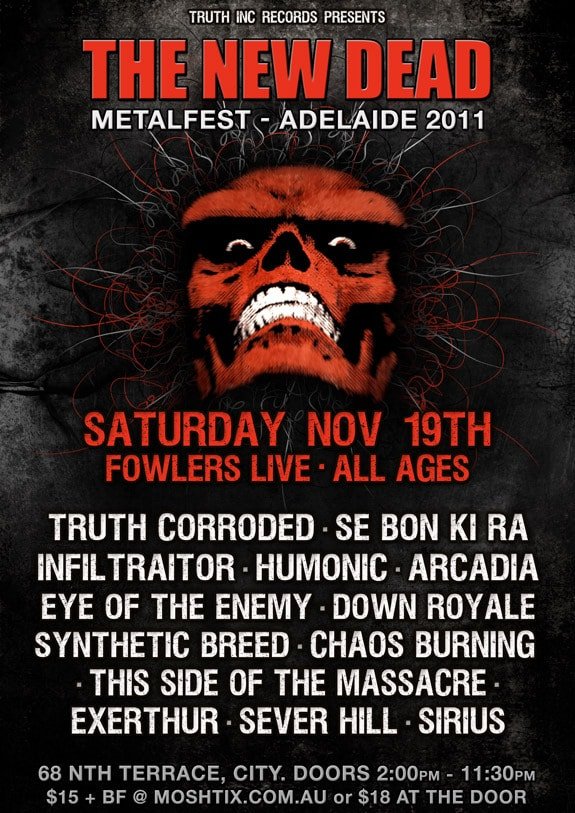